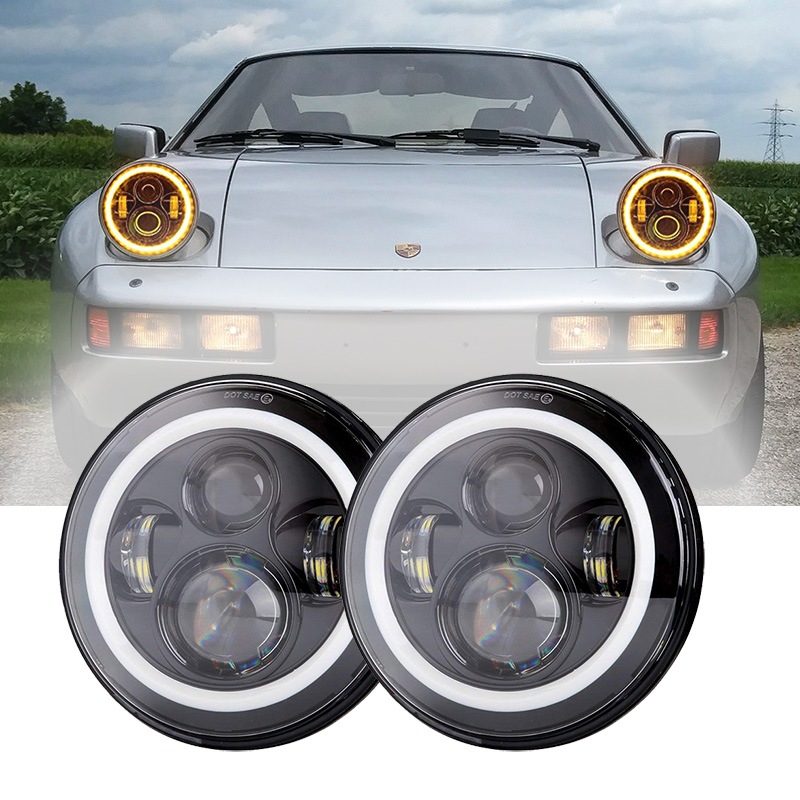 One of the questions posed by this new vehicle concerns the engine. Why a V8 ?. Without any doubt to be closer to the Americans …: the US market can be violently attacked, but everything has a limit. The reasons given by the German house are entirely logical: a V8, with its relatively low maximum speed, allows it to better pass the stringent noise regulations. The same reason could be applied to the new front engine layout, as some of the noise is shifted to the front of the vehicle, as opposed to the 911 where engine noise and exhaust were mixed. The noise could be, again, the cause that the cooling is by water, since it is possible to eliminate those produced by the air turbine. A V8 and water-cooled, two technical firsts at Porsche.

Despite everything, this engine has nothing to do with the usual American engines. Built in light alloy, it has a camshaft in the cylinder head for each row of cylinders, controlled by a toothed belt; the feeding is based on Bosch K-Jetronic injection. It is very far, then, from the American V8 (with pushrods), with its enormous carburettor, despite the angle of the V being the classic: 90º. The power is 250 DIN hp at 5,250 r.p.m., a figure much higher than the American standard. The torque is, however, lower than that of the large 6-liter US engines, although in any case it has the not inconsiderable figure of 37 mkg at 3,600 rpm. As can be seen, the maximum torque regime is also somewhat high in contrast to American engines. Porsche therefore seems to have managed to reconcile American tastes with the essential ways to satisfy Europeans. A V8 placed in front to please the Americans; a transmission not so classic to do it with the Europeans, which give the car a mass distribution suitable for sporty driving. As in the case of the 924, the 928 is equipped with a “transaxle” system, that is, a box and differential mounted on the rear axle, rigidly connected to the engine by means of a tube, inside which the transmission shaft rotates. A difference, despite everything for Europeans: the 5-speed gearbox (4 in the case of the 924), since Americans have the right to an automatic gearbox, which we advise against sports driving lovers, those who really they love the car. The clutch is coupled to the engine, unlike in the Alfetta, but the battery is rigidly fixed to the gearbox-differential assembly to thus modify the natural frequency of the “transaxle” system, incompatible with its anchoring points, eliminating vibrations. With a full tank and a spare tire in the rear hood, the Porsche is very close to a 50-50 mass distribution. In any case, it is difficult to imagine that 50 percent of the weight gravitates on the rear axle …, we will check it at the wheel.

As for the suspensions, if the front is classic with Porsche 928 led headlights, with its overlapping triangles, the work done to fine-tune the rear is evident. Based on independent wheels, it adopts the generic name “Weissach”. It is made up of lower diagonal and upper transversal arms; the originality lies in the fact that there is no variation in parallelism, especially when the wheel is shed. This is nothing new for athletes, since the same thing happens in most competition vehicles. By contrast, the originality in the case of the 928 lies in the system used to achieve this effect. But why is it so important not to have any parallelism variation in the rear axle in the case of shedding? The answer could not be simpler: for better stability of this train when braking or if in a curve we are forced to lift our feet.

In the braking chapter, the 928 adopts four ventilated disc brakes. On the contrary, the calipers are floating, that is to say, they have a single piston on the inside, because in Porsche they think that in this way the temperature of the liquid does not reach such high levels. It is curious, we thought just the opposite, since the volume of liquid is less than that of a fixed caliper with 2 or 4 pistons.

The true explanation is undoubtedly another. In effect, the front axle drop is negative, a solution that involves tires with a very large front drop (or at a large pivot angle), which takes up space and prevents the outer piston from fitting. So why a negative camber? The answer is also immediate: for greater stability on the straight and when braking.